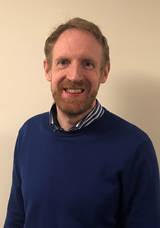 In the first of a new series introducing some of our Newcastle BRC academic and clinical researchers we talk to Professor John-Paul Taylor, Deputy Dementia Theme Lead for the BRC. John-Paul is a Professor of Translational Dementia Research at Newcastle University and an Honorary Consultant in Old Age Psychiatry with the Cumbria, Northumberland, and Tyne and Wear (CNTW) NHS Trust.

John-Paul specialises in understanding the causes and symptoms of a particular type of dementia: dementia with Lewy bodies (DLB), also known as Lewy body disease. DLB is the second most frequent cause of age-related neurodegenerative dementia with at least 10-15% of older adults with dementia thought to be living with this little known but not uncommon disease.

Lewy bodies are deposits of abnormal proteins inside brain cells and are named after Dr Friedrich Lewy who first discovered them under the microscope in 1912. Lewy bodies are associated with the death of brain cells and subsequent deterioration of the brain. DLB symptoms include problems with memory, concentration and other cognitive abilities as well as potentially difficulties with balance, movement, sleep and autonomic functioning (bladder, bowel, blood pressure control).

What drew you to the field of Dementia research?

I studied for my PhD as part of an intercalated medical degree. I was focused on paediatric neuroscience at the time. Although I loved working with children, I also did some placements working with older people. Through this, I came to realise that I was most interested in Psychiatry in older adults and – as an extension of this – the neurodegenerative diseases that cause difficulties for older people. This is an area of huge unmet need and there is significant opportunity to undertake research that can make a real, practical difference. This is why I ended up focusing both my clinical and my research career in this field.

What are you currently working on? What question or challenge were you setting out to address when you started the work?

My research is focused on how we can improve the rate and accuracy of diagnosis of dementia with Lewy bodies (DLB), as DLB is often mistaken for other forms of dementia. I am also working on new ways to manage and treat the symptoms of the disease. My research is very much based in clinical practice. This allows me to focus on the patient experience of DLB and what symptoms they find most difficult to live with. I can then direct my research to the areas that will bring most benefit to people.

I currently have Newcastle BRC funding to look at the cholinergic system of the brain – a vital neurotransmitter system that produces Acetylcholine (ACh); ACh is a chemical messenger that helps govern our attention, thinking abilities, and memory. We already know that DLB strongly affects the cholinergic system. Although there are existing treatments that help with these symptoms, there is scope to improve how well they perform.

Drugs that aim to boost the production of ACh in the brain have been the most successful treatments for dementia to-date. They aren’t cures, but they can improve a patient’s experience of the symptoms. For example, hallucinations can get better, fluctuations in cognitive ability can improve, feelings of apathy are reduced and patients find they have more motivation and better memory function. Unfortunately, some patients do not respond well to the current treatments. Even for those who do, the effects may not be sustained. I am examining whether we can create a longer or deeper window of improvement in these symptoms for patients. This involves finding better measures to tell us how well the cholinergic system is working. With this, we can identify and apply new treatments to improve its function.

What is the benefit of an early DLB diagnosis?

DLB overlaps with Alzheimer’s, but it is a different condition. Because of this, patients may experience side-effects from taking drugs intended to treat Alzheimer’s. Having an accurate diagnosis early on is helpful. We still face the challenge with DLB (as with all dementias) that there are no disease-modifying treatments, or a cure. But better understanding of the condition and earlier diagnosis, can allow patients and families to plan for the future. It can also allow doctors to streamline and deploy the right interventions early on. Lastly, doctors can identify people who could participate in upcoming clinical trials that are looking at therapies and treatments in this area. these are often focussed on interventions that could slow the disease’s progress.

Can you tell us a bit more about where your work fits in to the broader field of dementia research?

In Newcastle we benefit from having a critical mass of researchers in the field of dementia broadly, but also specifically in DLB research. Newcastle University received a top ranking worldwide for expertise in DLB, in an Expertscape review last year.

The research here in Newcastle spans fundamental science, through to translational medical research. It then extends right into clinical practice, working with actual patients.

In the laboratory we have excellent scientists at work. They are working on improving our understanding of:

Other research used advanced neuroimaging techniques. The aim here is to understand why certain LBD patients have symptoms like hallucinations or changes in their thinking abilities. In the clinical space, we have clinician scientists developing better techniques to diagnose patients earlier on. They are also conducting research that is helping patients to manage their symptoms.

What do you predict as being the next major breakthrough in this area?

Optimistically, there is now a huge amount of activity looking at potential new therapeutics. In a current project with Cambridge and Exeter Universities, we are conducting an exercise to examine the possibility of repurposing existing drugs used in DLB. We want to know if they can either alleviate symptoms or even affect the underlying disease itself.

As Newcastle BRC’s Deputy Theme Lead for Dementia, I’m interested in fostering a broader research endeavour in the field. I aim to grow our capacity, drawing on these different types of research and encourage collaborations that can produce new ideas and approaches.

The BRC has many research themes, do you feel this has been useful for you in carrying out your research?

Being part of the Newcastle BRC has opened up a host of opportunities to cross-fertilise my research. I am often prompted by informal ‘corridor’ discussions as well as through more formal strategies to encourage cross-theme working. Within the Dementia theme, we’re about to start trials for a highly novel agent. This has come from work in the Liver disease theme around ‘brain fog’ symptoms in Primary Biliary Cholangitis patients. These symptoms closely resemble those experienced by people with Parkinson’s. We’re hopeful that trials will show that this treatment also improves the symptoms of Parkinson’s disease patients.

We’ve also seen some exciting work coming from colleagues in the Neuromuscular Disease theme. They have identified that patients suffering from a mitochondrial dysfunction seem to develop Lewy bodies. This suggests that the mitochondria potentially have a role to play in DLB.

And finally, a colleague working in the Skin & Oral Disease theme has been looking at whether skin biopsies might reveal the presence of the alpha-synuclein protein (present in patients with DLB) at an early stage before it becomes apparent in the brain.