New research shows how long-term conditions are linked to sarcopenia

Researchers with Newcastle AGE Group have found links between long-term conditions and sarcopenia, suggesting that targeted interventions in older patients could aid prevention and more effective treatment for this condition.

Sarcopenia is the accelerated loss of skeletal muscle which is more common in the older population, and linked to a range of health problems including disability.

Recent European guidelines for the diagnosis of sarcopenia (with authors including Professor Avan Sayer, leader of the AGE Research Group and Director of the NIHR Newcastle BRC) suggest that sarcopenia may also occur at younger ages in the setting of long-term conditions such as heart or liver disease. However, there has been little research in this area, especially to look at which long-term conditions pose the greatest risk of sarcopenia.

In a new analysis of data from 499,046 people taking part in UK Biobank, published in the Journal of Cachexia, Sarcopenia and Muscle, the AGE Research Group, supported by the NIHR Newcastle BRC, examined the links between long-term conditions and sarcopenia, which was identified from low measured handgrip strength. 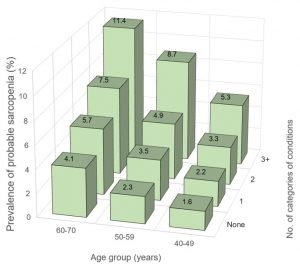 These findings are important as they suggest that particular groups could be targeted for interventions in mid‐life aimed at the prevention and treatment of sarcopenia.