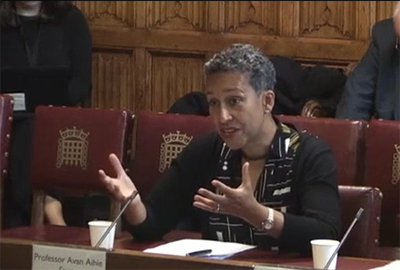 Director of the NIHR Newcastle Biomedical Research Centre and Professor of Geriatric Medicine, Avan Sayer, and Professor of Trials for Older People, Miles Witham, gave evidence to the House of Lords’ Science and Technology Committee on 22nd and 29th October, as part of their ‘Ageing: Science, Technology and Healthy Living Inquiry’.

Over the past three weeks, the House of Lords Science & Technology Committee has been hearing evidence from experts as part of its inquiry – Ageing: Science, Technology and Healthy Living. This House of Lords Science & Technology Committee inquiry was set up to investigate how approaches from science and technology could be used to increase health span, to mitigate some of the negative effects of ageing, and to support older people living with poor health.

Avan Sayer, Director of the NIHR Newcastle Biomedical Research Centre and Professor of Geriatric Medicine, gave evidence to the committee on Tuesday 22nd October. Asked what steps or policies the Government should take to achieve its aim to ensure that people can enjoy at least five extra healthy, independent years by 2035, while at the same time narrowing the gap between the rich and the poor, Professor Sayer suggested three areas for immediate Government focus:

Professor Sayer also spoke about the importance of translational ageing research – the need to convert lab-based research in to tangible and practical benefits for patients, the public and the NHS. This includes the need to train the next generation of academic geriatricians and linked disciplines – echoing our focus here in the NIHR Newcastle BRC – where we have long-recognised that the UK does not have enough research-active clinicians and academics working in the field of ageing and long-term conditions and have invested significantly in the development of a custom approach to training the next generation and filling the skills gap. This approach is already seeing an impact, with 75% of Newcastle BRC-funded students choosing to stay in the field of ageing and long-term conditions and with more than 100 researchers and clinicians (including doctors and dentists, nurses, midwives and allied health professionals) receiving training in this area over the past 15 years.

Whilst giving his evidence to the committee on 29th October, Miles Witham, Professor of Trials for Older People and Deputy Theme Lead for Ageing Syndromes in the NIHR Newcastle BRC, agreed with comments made by the new Chief Medical Officer, Professor Chris Whitty, who expressed concern that the NHS is not structurally able to deal with patients with multiple conditions (multimorbidity).

Professor Witham highlighted how this configuration of our health and care system leads to a number of unintended consequences, including:

Professor Witham also discussed the need for Government to invest in the right infrastructure and training to bring more older people in to clinical trials effectively and efficiently as well as to create a regulatory enviornment that facilitates this work and that allows companies to get marketing authorisations for medicines with multiple benefits. He highlighted that the NIHR is aware of these issues and has been trying to accelerate bringing more older people into trials, but that the fact that Professor Witham’s post (Professor of Trials for Older People) at Newcastle is the only one of its type in the country, suggests that we need to pay more attention to this issue specifically.

References and other coverage: